When you produce 30 plus dozen eggs a week like we do at NineMile.Farm you end up with plenty of eggs for your own use beyond what you sell. Now I love bacon and eggs a great deal but you can’t just eat the same thing every day. I decided to try shrimp and eggs though I had never done so before, I can tell you it will not be the last time.

The shrimp were “cilantro and lime” shrimp left from a big tub of them I bought for our holiday party with family. They are getting to the expire date so this seemed a great way to use them.

Here is the ingredients I used

Here is how it all went down, with pictures

First I broke my eggs into a bowl, this is the best thing to do with farm eggs as you occasionally get a bloody yolk (like one in two hundred but it sucks when you drop it into a pan with 5 other eggs. Note the size of the double yolk and the white egg is a BIG egg. 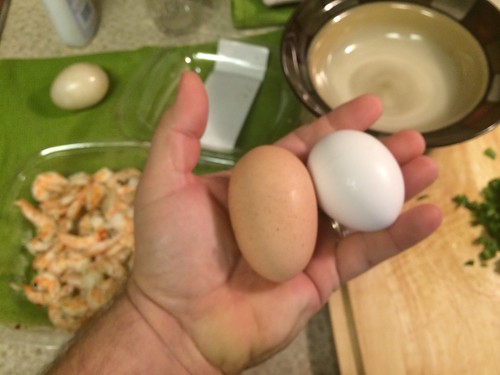 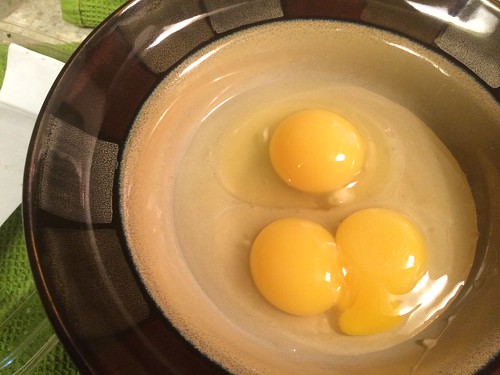 In the bowl I whisked up the eggs and added a little cream, you don’t have to but I find eggs get fluffier if you do.

I then diced up the peppers and began sauteing them in a bit of lard. You can use that or bacon fat, if you decide to use oil I recommend peanut oil or coconut oil, olive oil gets bitter if heated over 285. 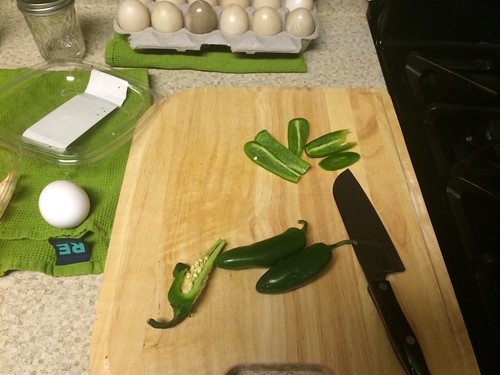 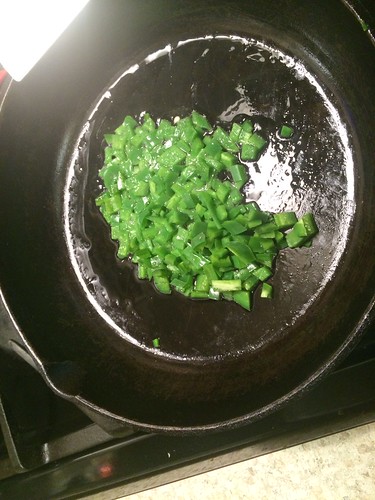 Next I added the shrimp and salsa to the pan after the peppers were about half cooked (bright green and still firm). It helps to keep the water down by getting out the salsa with a fork and draining it well. I used about 5 fork fulls of salsa but this is not a calibrated recipe, add as much or little as you like. 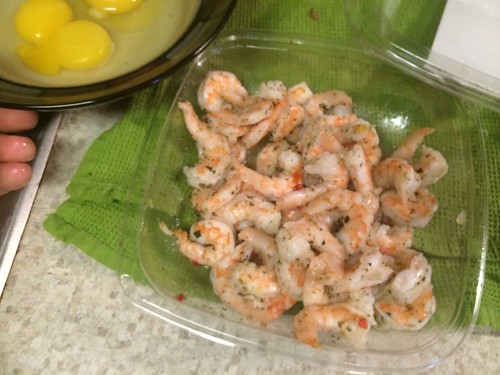 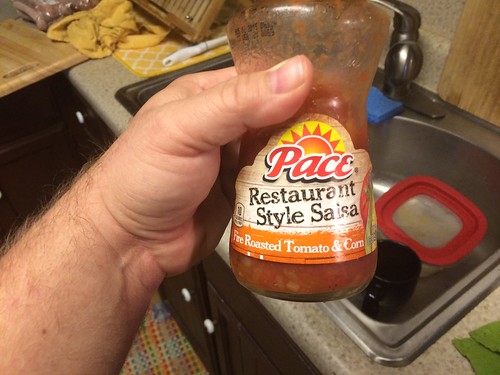 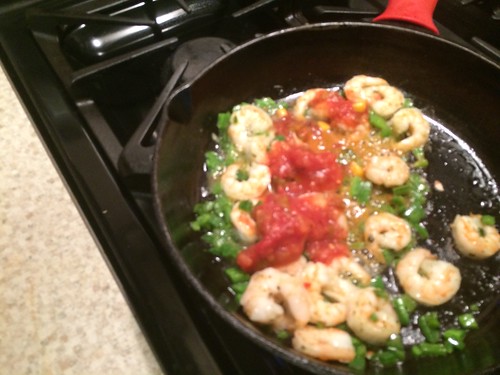 You cook the salsa, shrimp and peppers for only about 1 minute on medium low heat as the shrimp were already precooked. If using raw shrimp, cook until just turning pink as to not over cook them. Now you add the whisked eggs and turn the heat up to medium and add the eggs, scramble them gently until they are firm and dry to your preference.

Then I push them to one side of the pan in a pile and add cheese, kill the heat (remove from burner if you are stuck with an electric stove), cover and let the cheese melt.

Notice how NOTHING sticks to my old Griswold Cast Iron pan that is about 100 years old and was picked up at an antique mall for 20 bucks. Old pans are the best, back in our grandparents day they were milled after casting. If you want to know more about awesome cast iron cooking, what to look for and why to buy an old pan, read this great article by my good friend Paul Wheaton in Montana. How to: Cast Iron Skillet Non Stick and Lasts a Lifetime. 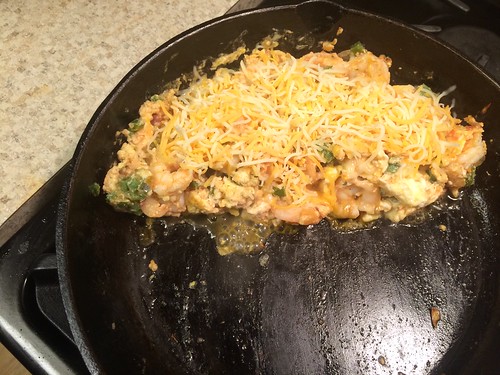 Once cheese is melted cut into portions. This makes about two portions for normal people or one big portion for those of us that eat only on average two meals a day. 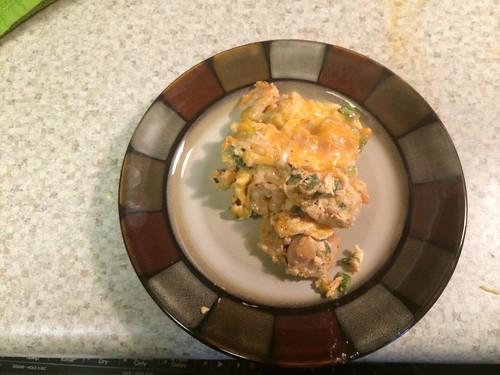 A Few Notes About the Above Dish

First, while this was a great way to use up the left over shrimp, I would advise unless you have a need to do the same, use raw fresh shrimp. This was good no doubt and the shrimp were not tough or really over done but from the pictures alone you can see they are past that nice bright pink color when they are perfect.

Second, I am sold on seafood and eggs! I think canned red salmon would be good done much the same way, as would nova locks added on top and just warmed though at the end. A mix of crab and shrimp would be amazing, doing that and adding sliced green onions would be wonderful.

Third, note that I don’t make omelets like restaurants do and I never will, and I advise you not to as well. Why? When you make a conventional omelet you end up with a “cooked egg tortilla” (for lack of a better word) wrapped around the goodies. By making a scramble the egg clings to the goodies and everything is enjoyed well incorporated. I can make a pretty omelet but it is a pain in the ass for no culinary gain, frankly I consider it a loss.

Fourth, finely diced and fried potatoes or jerusalem artichokes would be a nice addition to this. Also while I strive to keep my carb intake low this recipe screams out to be served on top of a lightly pan toasted and buttered piece of sourdough.

Fifth I have to make this with duck eggs! Sadly right now we are back ordered with customers on our duck eggs and until we can up production I won’t have many for my own use, the customer comes first of course.

The good news is we are adding 7 adult ducks to the flock this week and 5 are hens of laying age. These will all be Muscovy Ducks and that should give us an additional 25-30 eggs a week. We will also rear some of them as future layers and meat birds.

On top of that I have 50 dedicated layers on order from Metzer Farms, they will be here about January 14th, BUT sadly they won’t be of laying age for about 20 weeks after that.

To learn more about our farm and how you can get our awesome Farm Fresh Eggs visit NineMile.Farm